A kite is traditionally a tethered heavier-than-air craft with wing surfaces that react against the air to create lift and drag. A kite consists of wings, tethers, pulleys, and anchors. Kites often have a bridle to guide the face of the kite at the correct angle so the wind can lift it. A kite’s wing also may be so designed so a bridle is not needed; when kiting a sailplane for launch, the tether meets the wing at a single point. A kite may have fixed or moving anchors. Un-traditionally in technical kiting, a kite consists of tether-set-coupled wing sets; even in technical kiting, though, a wing in the system is still often called the kite. 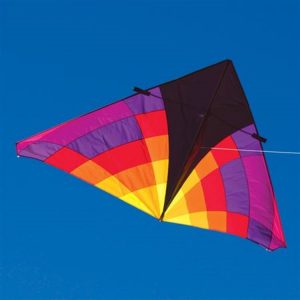 Kites were invented in China. Nearly 1500 years ago started this kite revolution.  It makes a little sense when looking at the art of origami that developing these flying contraptions makes some sense.  They finally made there way in the North American culture in the 1750s by none other than Benjamin Franklin.  He of course was much more interested in the opportunity of snagging a bolt of lightening than enjoy a good breezy day with the family. A hundred years later during 1860-1910 were considered more of the “Golden Era of Kiting”.  This was when more and more science and mechanical uses were being done. Everything from weather predictions and research to aeronautics were being studied with the help of our friend the kite.

Now in the era of technology this old school flying friend is used for much less serious purposes.  We now have songs in our culture from Mary Poppins “Let go fly a kite” to enormous kite conventions where people share their most favorite kite styles such as dual line kits, stunt kits and 6 stack Delta Diamond Kites.  Let’s have some fun with this, welcome to the best kite resource and deals on kites online and in Arizona.  Don’t forget your kite supplies before heading out.