Let’s Have Some Fun

Let’s have some fun. How about some kite trivia? 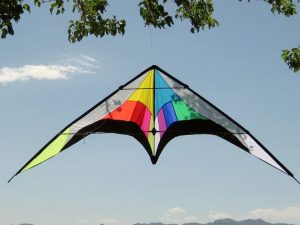 Let’s try this. Do you know how big the world’s largest kite is? In 1997 Peter Lynn designed a ram-air inflated kite deemed the Megabite, a 635 square meter kite that Guinness recognized as the world’s largest. The kite was so massive 1,000 people could stand inside. In 2005, Lynn created the Kuwait flag, the current world record holder at 1019 square meters.

Currently the record holder for the longest kite is the one introduced at the 2015 International Kite Flying Festival in Wulong China, At the festival that attracted kite flyers from thirteen countries this dragon shaped marvel made up of 2,000 individual pieces printed with the characters Chinese Dream was debuted. It took almost eight hours to get this 5,000-meter long kite into the sky!

The International Kite Festival in Gujarat province India is credited as being the largest event of its kind in the world. Months before the huge festival, homes in the city begin to manufacture kites for the festival. The festival centers on Uttarayan, the shortest day of winter according to the Indian calendar that is considered to be one of the most important harvest days. Many cities in the province organize kite competition events that lead to the major festival. The festival has grown in popularity in recent years and is now a national holiday in India. In 2012, the Tourism Corporation of Gujarat submitted the International Kite Festival to the Guinness Book of World records for consideration as the largest event of its kind in the world. At that festival entrants and participants came from forty-two countries.

You don’t have to travel to India to experience the excitement and fun of a major kite festival. The Huntington Beach Kite Party in Huntington Beach, California attracts professional kite flyers from throughout the world as well as amateurs. The annual event is one of the largest in the country. The Blossom Kite Festival at the end of March is one of the popular annual events in Washington D.C. It is regarded as one of the top 10 kite festivals in the United States.

Kite Fest Louisiane that takes place in West Baton Rouge, Louisiana at the end of March or in early April depending on weather is a wonderful celebration of kiting for the entire family. The free event is the only festival of its kind in the state, and is quickly growing in popularity. Last year more than 10,000 people were in attendance to participate in kite making and kite design classes, indoor kite flying, night flying with kites adorned with LED lights and other fun events designed specifically for children like candy dropping kites.

If you are new to the fun of kite flying, or you are a seasoned veteran, we have everything you need. Stop by Tumbleweeds & Tarantulas today. And if you have a road trip planned this year, perhaps a kite festival would make an excellent destination.