Some Fun With Kite Trivia

Let’s have some fun with some trivia about kites! Did you know…. 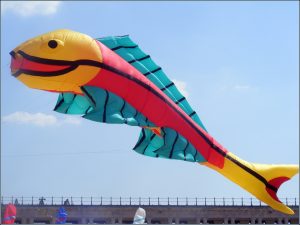 Fun With Kite Trivia. A kite only .196 inches holds the title of smallest flying kite in the world. At the other end of the scale the largest kite dubbed the Megabite measured an astounding 6781.26 square feet. The longest kite on record measured 3,394-feet. The standing record for highest reach of a kite is 12,471-feet, and for a train of kites 31,955-feet. The fastest recorded speed for a kite, more than 120-miles per hour. The largest number of kites flown on a single line is 11,284, a record that is held by a famous by a Japanese kite maker.

Kites have been used for more than just sport and fun. During WWII pilots in the RAF were issued with a rescue kit that included a small inflatable dingy and a “Gibson Girl” folding box kite which could be used as an aerial for a portable transmitter. Marconi used a Hexagon kite for a similar reason, with the line serving as an aerial to transmit the first radio signals across the Atlantic Ocean.

Kites have been banned over the years for some odd and unusual reasons. In 1760, in Japan, a decree was issued that banned kites as to many people were flying them instead of working. During the post war era when Berlin was a divided city, large kites were banned in East Germany from concerns that they might be used to lit a man over the Berlin Wall.

Some of the earliest recorded use of kites indicate that they were often used for military applications. During the American Civil War kites were used to deliver correspondence in combat areas. For countless centuries kites were used in battles for target practice, signaling, as barrage kites, and the dropping of leaflets.

In some cultures there is a religious significance to kites. As an example, in some Chines districts In the Orient, they are given as gifts to bring happiness, good luck, and prosperity, or to cure illness. These traditions have survived into the modern era even though during the Cultural Revolution there were restrictions on kite flying that could result in a prison term of three years. There are other interesting traditions surrounding kites in China. As an example some ancient texts suggests that focusing on high flying kites will maintain good eyesight. looking at kites high in the sky maintains good eyesight. There is also a belief that tilting your head back to look at kites in the sky with your mouth opened slightly will get rid of excess body heat and restore a healthy yin-yang balance.
And one more from China. A name for kites is Fen Zheng, a name derived from early specialty kites used to carry wind musical instruments.

Last but not least, it is estimated that there are over 50 million kites sold in the United States every year. So, join the fun. Stop by Tumbleweeds & Tarantulas today and get your kite supplies.