The High Flying History of Kites

The High Flying History of Kites

The first hot air air balloon amazed crowds when it debuted in 1783. In 1903 the first mechanically powered aircraft took flight. These manifestations of mans quest to dance on the winds with the freedom of a bird are recent history when compared to that of the kite that is today growing in popularity. There is evidence that kites were being flown more than 2,000 years ago in China, and the earliest written account of kite flying dates to about 200 B.C. in a story about  General Han Hsin of the Han Dynasty flying a kite to measure how far his army would have to tunnel to reach past a cities defensive walls. According to the legend once he knew the distance his troops were able to surprise the enemy. 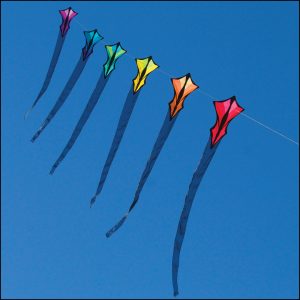 Traders from China took kiting to Korea, to India, to Afghanistan and across Asia where distinctive styles of kites as well as purposes for flying them developed. Another story about the use of kites in battle dates to around 600 A.D. when General Gim Yu-sin of Korea received orders to crush a revolt. Korean tradition held that a falling star was a bad omen and resultant of a large comet that streaked across the heavens on the eve of battle, his soldiers refused to fight. According to legend the General used a large kite and carried a fire ball up into the sky which inspired his troops who believed that the star had returned to heaven.

Kites arrived on the Japanese islands in about 700 A.D.. Buddhist monks used kites in ceremonies that were believed to ensure large harvests as well as keep evil spirits away. The kite figures prominently in a Japanese legend; in about 1700 an innovative robber used a large kite to reach the top of Nagoya Castle where a golden statue stood on the roof. According to the story he could not remove the statue but did take pieces. After his capture he glibly bragged of his high flying adventure and was summarily punished. For many years kite flying was reserved for monks and samurai warriors as to many people were distracted from their work by the past time.

Marco Polo carried stories of kites to Europe on his return from China. Sailors and traders brought kites back from Japan and Malaysia in the 16th and 17th centuries but, surprisingly, kites never gained in popularity in Europe during the period. As late as the 18th and 19th centuries kites in Europe, and the British colonies in North America were used primarily as a tool for scientific research. Scientists including Benjamin Franklin and Alexander Wilson used kite flying to advance studies on wind and weather. Alexander Graham Bell and the Wright Brothers all experimented with kites to develop an understanding of aeronautics.

Miniature paintings that date to the early Mogul Period in around 1500 A.D. are tangible links to the earliest history of kites in India. Traditional literature of the period often has a story about a young lover that uses kites to deliver messages to an imprisoned princess.

Historically kites were used for a different purpose by the people in the Micronesia islands. Purportedly kites made of leaves carried bait great distances from the shore. The ancient Polynesians have legends about two gods that were brothers who introduced kites to earth bound man during a duel. To this day there are contests in the islands with the highest flying kite dedicated to the gods.

One of the most unusual uses for the kite dates to 1822 when George Pocock reportedly used a pair of kites to pull a carriage that at times reached speeds of more than 20 miles per hour! In one instance his speed was recorded at 100 miles per hour. His reason for such a novel mode of transport? Road taxes were based on the number of horses a carriage used so he was exempted from any tolls!

Would you like to learn more about the fun of kites? Stop by Tumbleweeds & Tarantulas today!